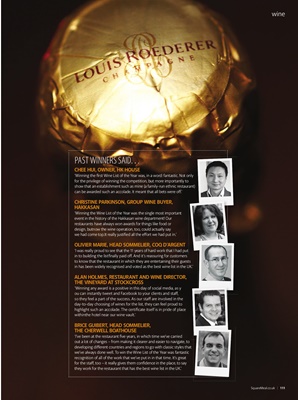 'Winning the  rst Wine List of the Year was, in a word: fantastic. Not only

for the privilege of winning the competition, but more importantly to

can be awarded such an accolade. It meant that all bets were o .'

event in the history of the Hakkasan wine department! Our

restaurants have always won awards for things like food or

design, butnow the wine operation, too, could actually say

we had come top.it really justi ed all the e ort we had put in.'

in to building the list  nally paid o . And it's reassuring for customers

in has been widely recognised and voted as the best wine list in the UK.'

THE VINEYARD AT STOCKCROSS

'Winning any award is a positive in this day of social media, as y

so they feel a part of the success. As our sta are involved in the

day-to-day choosing of wines for the list, they can feel proud to

highlight such an accolade. The certi cate itself is in pride of place

withinthe hotel near our wine vault.'

'I've been at the restaurant  ve years, in which time we've carried

out a lot of changes - from making it clearer and easier to navigate, to

we've always done well. To win the Wine List of the Year was fantastic

recognition of all of the work that we've put in in that time. It's great

for the sta , too - it really gives them con dence in the place, to say

they work for the restaurant that has the best wine list in the UK.'