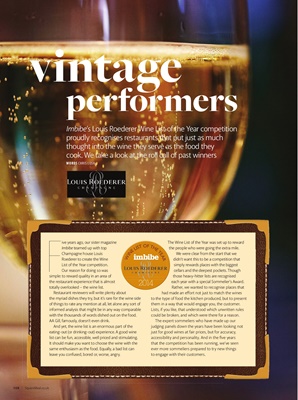 proudly recognises restaurants that put just as much

thought into the wine they serve as the food they

cook. We take a look at the roll call of past winners

ive years ago, our sister magazine

Imbibe teamed up with top

Roederer to create the Wine

Our reason for doing so was

simple: to reward quality in an area of

the restaurant experience that is almost

Restaurant reviewers will write plenty about

the myriad dishes they try, but it's rare for the wine side

of things to rate any mention at all, let alone any sort of

informed analysis that might be in any way comparable

with the thousands of words dished out on the food.

And yet, the wine list is an enormous part of the

list can be fun, accessible, well priced and stimulating.

It should make you want to choose the wine with the

same enthusiasm as the food. Equally, a bad list can

The Wine List of the Year was set up to reward

the people who were going the extra mile.

We were clear from the start that we

didn't want this to be a competition that

simply rewards places with the biggest

cellars and the deepest pockets. Though

those heavy-hitter lists are recognised

each year with a special Sommelier's Award.

Rather, we wanted to recognise places that

had made an e ort not just to match the wines

to the type of food the kitchen produced, but to present

them in a way that would engage you, the customer.

Lists, if you like, that understood which unwritten rules

could be broken, and which were there for a reason.

The expert sommeliers who have made up our

judging panels down the years have been looking not

just for good wines at fair prices, but for accuracy,

accessibility and personality. And in the  ve years

that the competition has been running, we've seen

to engage with their customers.