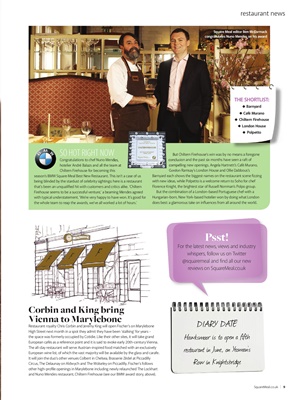 season's BMW Square Meal Best New Restaurant. This isn't a case of us

being blinded by the stardust of celebrity sightings: here is a restaurant

that's been an unquali­ ed hit with customers and critics alike. 'Chiltern

Firehouse seems to be a successful venture,' a beaming Mendes agreed

with typical understatement. 'We're very happy to have won. It's good for

the whole team to reap the awards, we've all worked a lot of hours.'

Barnyard each shows the biggest names on the restaurant scene ­ zzing

with new ideas, while Polpetto is a welcome return to Soho for chef

But the combination of a London-based Portuguese chef with a

does best: a glamorous take on in uences from all around the world.

congratulates Nuno Mendes on his award

Hawksmoor is to open a fi fth

restaurant in June, on Yeoman's

For the latest news, views and industry

@squaremeal and find all our new

the space was formerly occupied by Cotidie. Like their other sites, it will take grand

European cafés as a reference point and it is said to evoke early 20th-century Vienna.

European wine list, of which the vast majority will be available by the glass and carafe.

It will join the duo's other venues Colbert in Chelsea, Brasserie Zédel at Piccadilly

Circus, The Delaunay on Aldwych and The Wolseley on Piccadilly. Fischer's follows