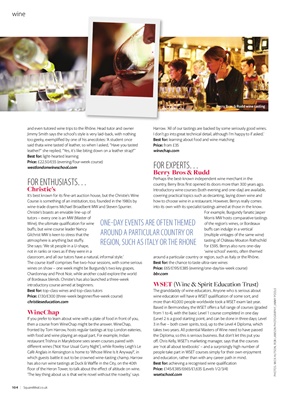 wine and even tutored wine trips to the Rhône. Head tutor and owner

Jimmy Smith says the school's style is very laid-back, with nothing

too geeky, exempli ed by one of his anecdotes: 'A student once

said thata wine tasted of leather, so when I asked, "Have you tasted

leather?" she replied, "Yes, it's like biting down on a leather strap!"'

It's best known for its  ne-art auction house, but the Christie's Wine

Course is something of an institution, too, founded in the 1980s by

Christie's boasts an enviable line-up of

tutors - every one is an MW (Master of

Gilchrist MW is keen to stress that the

atmosphere is anything but stu� y.

She says: 'We sit people in a U-shape,

not in ranks or rows as if they were in a

classroom, and all our tutors have a natural, informal style.'

The course itself comprises  ve two-hour sessions, with some serious

wines on show - one week might be Burgundy's two key grapes,

Chardonnay and Pinot Noir, while another could explore the world

of Bordeaux blends. Christie's has also launched a three-week

If you prefer to learn about wine with a plate of food in front of you,

then a course from WineChap might be the answer. WineChap,

with food and wine playing an equal part. For example, Indian

Café Anglais in Kensington is home to 'Whose Wine Is It Anyway?', in

which guests battle it out to be crowned wine-tasting champ. Harrow

has also run wine tastings at Duck ° Wa± e in the City, on the 40th

 oor of the Heron Tower, to talk about the e� ect of altitude on wine.

'The key thing about us is that we're novel without the novelty,' says

Harrow. 'All of our tastings are backed by some seriously good wines.

I don't go into great technical detail, although I'm happy to if asked.'

Best for: learning about food and wine matching

Perhaps the best-known independent wine merchant in the

Introductory wine courses (both evening and one-day) are available,

covering practical topics such as decanting, laying down wine and

how to choose wine in a restaurant. However, Berrys really comes

into its own with its specialist tastings aimed at those in the know.

of the region's wines, or Bordeaux

bu� s can indulge in a vertical

(multiple vintages of the same wine)

around a particular country or region, such as Italy or the Rhône.

Best for: the chance to taste ultra-rare wines

The granddaddy of wine educators. Anyone who is serious about

wine education will have a WSET quali cation of some sort, and

Based in Bermondsey, the WSET o� ers a full range of courses (graded

from 1 to 4), with the basic Level 1 course completed in one day

(Level 2 is a good starting point, and can be done in three days; Level

takes two years. All potential Masters of Wine need to have passed

the Diploma, so this is serious business. But don't let this put you

are 'not all about textbooks' - and a surprisingly high number of

people take part in WSET courses simply for their own enjoyment

and education, rather than with any career path in mind.

AROUND A PARTICULAR COUNTRY OR

REGION, SUCH AS ITALY OR THE RHONE