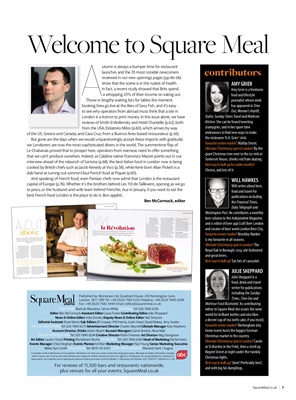 utumn is always a bumper time for restaurant

launches and the 35 most notable newcomers

show that the scene is in the rudest of health.

In fact, a recent study showed that Brits spend

a whopping 25% of their income on eating out.

Throw in lengthy waiting lists for tables the moment

booking lines go live at the likes of Sexy Fish, and it's easy

London is a licence to print money. In this issue alone, we have

reviews of Smith  Wollensky and Hotel Chantelle (p.62), both

from the USA; Estiatorio Milos (p.60), which arrives by way

of the US, Greece and Canada; and Casa Cruz, from a Buenos Aires-based restaurateur (p.56).

But gone are the days when we would unquestioningly accept these imports with gratitude;

we Londoners are now the most sophisticated diners in the world. The summertime  op of

Le Chabanais proved that to prosper here, operators from overseas need to o er something

that we can't produce ourselves. Indeed, as Calabria native Francesco Mazzei points out in our

interview ahead of the relaunch of Sartoria (p.68), the best Italian food in London now is being

cooked by British chefs such as Jacob Kenedy at Vico (p.58), while Kent-born Allan Pickett is a

And speaking of French food, even Parisian chefs now admit that London is the restaurant

capital of Europe (p.76). Whether it's the brothers behind Les 110 de Taillevent, opening as we go

to press, or the husband-and-wife team behind Frenchie, due in January, if you want to eat the

best French food London is the place to do it. Bon appétit.

Amy Grier is a freelance

has appeared in Time

Kitchen. She can be found tweeting

@amygrier, and in her spare time

Ultimate Christmassy spot in London? By the

giant Christmas tree next to the ice rink at

Best way to bulk up for colder months?

Cheese, and lots of it.

Will writes about beer,

food and travel for

beer column to the Independent Magazine,

and is editor of beer app Craft Beer London

is my favourite in all seasons.

Ultimate Christmassy spot in London? The

Best way to bulk up? Eat lots of cassoulet.

Julie Sheppard is a

Times, Time Out and

editor to Square Meal she scours the wine

a decent cup of tea (with cake, if you insist).

Christmas market in the country.

at St Martins in the Field, then a stroll up

Regent Street at night under the twinkly

and with big fat dumplings.

For reviews of 11,500 bars and restaurants nationwide,

plus venues for all your events: squaremeal.co.uk

thousands of people who will never

eat in his restaurants but have tasted

his food nonetheless. Not because

they've made a recipe from one of his

out until next month) or dined at L'Anima,

the bluechip City Italian where he was chef

patron until earlier this year. Nor is it because

they're looking forward to his arrival at

by D�D London that Mazzei is set to revive

when it reopens in November.

No, they know Mazzei's name because

it's there on the menu at Pizza Express, right

above the Calabrese pizza that he created

for the omnipresent chain six years ago,

introducing the British high street to what has

now become the most famous ingredient

of his native Calabria: the spicy, spreadable

After seven years cooking southern Italian food in the City,

chef Francesco Mazzei's aim is to bring the best food from

"In Calabria they call me 'King 'Nduja',"

every time I go home I'm on Rai TV. That pizza

has gone all around the world and the guys

who make the 'nduja do very well from it, it

compliment, not necessarily for a chef, but

for a person, when you do something good

and you really get something back which is

not money, it's not material - it's love and

respect. I think there is nothing better in life."

This pride in the best Italian ingredients

will continue at Sartoria. "The thing we keep

forgetting is how great, how simple, but at

the same time how sophisticated Italian

by putting things on the plate to look pretty.

We concentrate more on the ingredients.

We get crazy about ingredients, travelling

miles and miles to nd the right tomato or

While Mazzei made his name introducing

the ingredients of southern Italy to British

palates, the menu at Sartoria will oer food

from all over the country. "We'll do a nice

best Milanese. I want people to come back

for that Milanese. They're going to trust

Sartoria and me for the quality of ingredients

rather than the presentation. We'll do the

best food that Italy can oer."

Part of that oering will be breakfast. "When

you think about Italian breakfasts, you think

there's not much around, which is not true.

If you go to southern Italy, you've got all this

a Turkish breakfast. I'm doing a dish of 'nduja

and three dierent eggs, which is called

'eggs purgatorio'. It's quite spicy. It's a dish my

grandmother used to have after she'd been

working in the garden for a few hours and

she needed some proper food."

There'll also be 'The Italian Job', basically a

take on a full English with Italian ingredients,

as well as pastries and cold meats. And

of course, no Italian breakfast is complete

ON THE PLATE TO LOOK PRETTY OR TO LOOK AMAZING. WE

CONCENTRATE MORE ON THE INGREDIENTS"

Piccadilly. Sitting opposite me

are two of the three Gardinier

the French Corbin and King fresh

o  the Eurostar to oversee the

opening of Les 110 de Taillevent in the capital;

their rst foray onto British soil.

It's fair to say they've got form. The

Le Taillevent, one of the most iconic

restaurants in Paris, since 2011, opening a

brasserie across the road the following year -

the rst Les 110 de Taillevent, named for the

by the glass, as well as the bottle.

The celebrated London opening on 21

to the West End's wine economy, sited as it is

Stéphane looks after other family ventures)

marks a sea change in the global food scene,

with London further cementing its position

as the gastronomic capital of Europe.

"When you are looking for a big foodie city

in Europe the obvious answer is London,"

explaining why they chose our city, despite

stupid war and competition between London

and Paris. There are great chefs and great

restaurants on both sides. We [the French]

don't have anything to teach the English.

There is room for us here in London." A bistro

serving 110 of the best wines in the world by

The brothers go on to tell me that 110

will have its own cellar, just as their French

venues do, but this one will also carry a host

of British wines, as well as unique bottles

from other world regions not found in their

"It's about taking inspiration from the

country you nd yourself in. We will do the

same with the food - modern interpretations

produce," explains Thierry. "In London, we

will also be open for breakfast, pairing the

dishes on the menu with a selection of hot

a breakfast scene, but here it's huge, so it's a

There are a few reasons why so many French

restaurateurs, bar owners and chefs are

nding such success this side of the channel:

one being emerging di erences between

diners and the establishments they frequent.

up shop on this side of the channel, Square Meal investigates how London has

"WHEN YOU ARE LOOKING FOR A BIG FOODIE CITY

IN EUROPE THE OBVIOUS ANSWER IS LONDON"