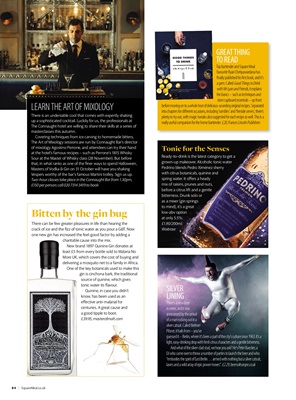 � nally published his � rst book, and it's

with Mr Lyan and Friends, it explains

the basics - such as techniques and

before moving on to a whole host of delicious-sounding original recipes. Separated

into chapters for di� erent occasions, including 'rambles' and '� reside serves', there's

plenty to try out, with magic tweaks also suggested for each recipe as well. This is a

Tonic for the Senses

Ready-to-drink is the latest category to get a

with citrus botanicals, quinine and

mix of raisins, prunes and nuts,

before a citrus lift and a gentle

as a mixer (gin springs

LEARN THE ART OF MIXOLOGY

There is an undeniable cool that comes with expertly shaking

up a sophisticated cocktail. Luckily for us, the professionals at

The Art of Mixology sessions are run by Connaught Bar's director

of mixology Agostino Perrone, and attendees can try their hand

at the hotel's famous recipes - such as Perrone's 1815 Whisky

Sour at the Master of Whisky class (28 November). But before

that, in what ranks as one of the  ner ways to spend Halloween,

Masters of Vodka  Gin on 31 October will have you shaking

Vespers worthy of the bar's famous Martini trolley. Sign us up.

Two-hour classes take place in the Connaught Bar from 1.30pm,

Bitten by the gin bug

There can be few greater pleasures in life than hearing the

crack of ice and the  zz of tonic water as you pour a GT. Now

charitable cause into the mix.

least £5 from every bottle sold to Malaria No

More UK, which covers the cost of buying and

delivering a mosquito net to a family in Africa.

One of the key botanicals used to make this

gin is cinchona bark, the traditional

source of quinine, which gives

Quinine, in case you didn't

know, has been used as an

centuries. A great cause and

a good tipple to boot.

in town, and it was

announced by the arrival

of a man rocking out in a

Pilsner, it hails from - you've

And what of the silver-clad stud, we hear you ask? He's Peter Baecker, a

"embodies the spirit of East Berlin… armed with nothing but a silver catsuit,

lasers and a wild array of epic power moves". £2.29, beersofeurope.co.uk