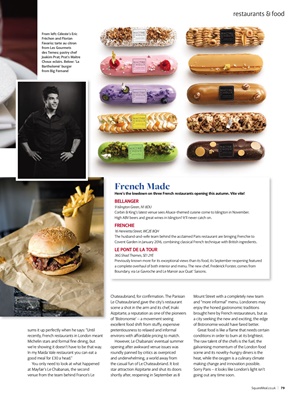 Chateaubriand, for con rmation. The Parisian

scene a shot in the arm and its chef, Inaki

Aizpitarte, a reputation as one of the pioneers

of 'Bistronomie' - a movement seeing

pretentiousness to relaxed and informal

environs with a  ordable pricing to match.

opening after awkward venue issues was

roundly panned by critics as overpriced

and underwhelming, a world away from

the casual fun of Le Chateaubriand. It lost

shortly after, reopening in September as 8

sums it up perfectly when he says: "Until

we're showing it doesn't have to be that way.

In my Maida Vale restaurant you can eat a

You only need to look at what happened

at Mayfair's Le Chabanais, the second

venue from the team behind France's Le

Previously known more for its exceptional views than its food, its September reopening featured

a complete overhaul of both interior and menu. The new chef, Frederick Forster, comes from

and "more informal" menu. Londoners may

brought here by French restaurateurs, but as

a city seeking the new and exciting, the edge

of Bistronomie would have fared better.

Great food is like a £ ame that needs certain

conditions in order to burn at its brightest.

The raw talent of the chefs is the fuel, the

galvanising momentum of the London food

scene and its novelty-hungry diners is the

heat, while the oxygen is a culinary climate

going out any time soon.