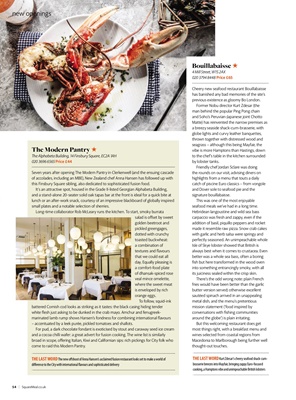 of accolades, including an MBE), New Zealand chef Anna Hansen has followed up with

It's an attractive spot, housed in the Grade II-listed Georgian Alphabeta Building,

lunch or an after-work snack, courtesy of an impressive blackboard of globally inspired

small plates and a notable selection of sherries.

salad is oset by sweet

that we could eat all

where the sweet meat

is enveloped by rich

white esh just asking to be dunked in the crab mayo. Amchur and fenugreekmarinated

- accentuated by a leek purée, pickled tomatoes and shallots.

For pud, a dark chocolate fondant is exoticised by stout and caraway seed ice cream

and a cocoa chilli wafer: a great advert for fusion cooking. The wine list is similarly

come to raid this Modern Pantry.

di�erence to the City with international �avours and sophisticated delivery

has banished any bad memories of the site's

Matte) has reinvented the narrow premises as

a breezy seaside shack-cum-brasserie, with

thrown together with distressed wood and

seagrass - although this being Mayfair, the

vibe is more Hamptons than Hastings, down

to the chef's table in the kitchen surrounded

the rounds on our visit, advising diners on

highlights from a menu that touts a daily

and Dover sole to seafood pie and the

This was one of the most enjoyable

seafood meals we've had in a long time.

carpaccio was fresh and zappy, even if the

with garlic and herb salsa were springy and

Isle of Skye lobster showed that British is

always best when it comes to crustacea. Even

better was a whole sea bass, often a boring

sh but here transformed in the wood oven

into something entrancingly smoky, with all

its juiciness sealed within the crisp skin.

fries would have been better than the garlic

sautéed spinach arrived in an unappealing

metal dish, and the menu's pretentious

around the globe') is plain irritating.

But this welcoming restaurant does get

most things right, with a breakfast menu and

wines selected from coastal regions from

Macedonia to Marlborough being further well