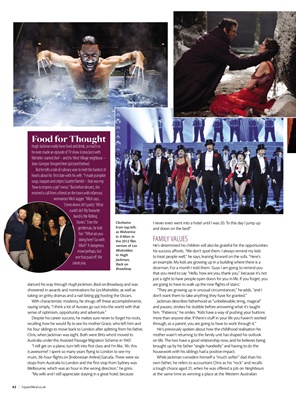 danced his way through Hugh Jackman, Back on Broadway and was

showered in awards and nominations for Les Misérables, as well as

taking on gritty dramas and a nail-biting gig hosting the Oscars.

With characteristic modesty, he shrugs o¦ these accomplishments,

saying simply, "I think a lot of Aussies go out into the world with that

sense of optimism, opportunity and adventure."

Despite his career success, he makes sure never to forget his roots,

recalling how he would §y to see his mother Grace, who left him and

his four siblings to move back to London after splitting from his father,

Chris, when Jackman was eight. Both were Brits who'd moved to

Australia under the Assisted Passage Migration Scheme in 1967.

"I still get on a plane, turn left into �rst class and I'm like, 'Ah, this

is awesome!' I spent so many years §ying to London to see my

mum, 36-hour §ights on [Indonesian Airline] Garuda. There were six

Melbourne, which was an hour in the wrong direction," he grins.

"My wife and I still appreciate staying in a great hotel, because

I never even went into a hotel until I was 20. To this day I jump up

and down on the bed!"

He's determined his children will also be grateful for the opportunities

his success a¦ords. "We don't spoil them. I always remind my kids

to treat people well," he says, leaning forward on the sofa. "Here's

an example. My kids are growing up in a building where there is a

doorman. For a month I told them: 'Guys I am going to remind you

that you need to say "Hello, how are you, thank you," because it's not

just a right to have people open doors for you in life. If you forget, you

are going to have to walk up the nine §ights of stairs.'

"They are growing up in unusual circumstances," he adds, "and I

don't want them to take anything they have for granted."

and pauses, strokes his stubble before answering what it's taught

him. "Patience," he smiles. "Kids have a way of pushing your buttons

more than anyone else. If there's stu¦ in your life you haven't worked

through, as a parent, you are going to have to work through it."

He's previously spoken about how the childhood realisation his

mother wasn't returning to the family unit has shaped his outlook

on life. The two have a good relationship now, and he believes being

housework with his siblings had a positive impact.

While Jackman considers himself a "much softer" dad than his

own father, he refers to accountant Chris as his "rock" and recalls

a tough choice aged 21, when he was o¦ered a job on Neighbours

Hugh Jackman really loves food and drink, so much so

he even made an episode of TV show Iconoclasts with

hearts about his �rst date with his wife. "I made pumpkin

soup, snapper and crêpes Suzette �ambé - that was my

'how to impress a girl' menu." But before dessert, she

received a call from a friend on the town with infamous

'Come down, let's party'. What

could I do? My favourite

band is the Rolling

her: "What are you

one that paid o�. We