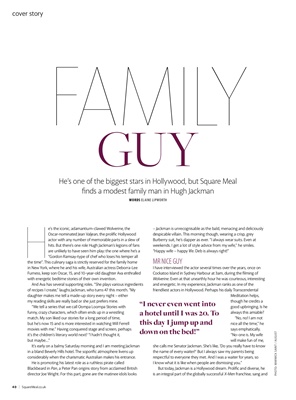 He's one of the biggest stars in Hollywood, but Square Meal

e's the iconic, adamantium-clawed Wolverine, the

actor with any number of memorable parts in a slew of

hits. But there's one role Hugh Jackman's legions of fans

are unlikely to have seen him play: the one where he's a

"Gordon Ramsay-type of chef who loses his temper all

the time". This culinary saga is strictly reserved for the family home

in New York, where he and his wife, Australian actress Deborra-Lee

with energetic bedtime stories of their own invention.

And Ava has several supporting roles. "She plays various ingredients

of recipes I create," laughs Jackman, who turns 47 this month. "My

daughter makes me tell a made-up story every night - either

my reading skills are really bad or she just prefers mine.

"We tell a series that we call Oompa Loompa Stories with

funny, crazy characters, which often ends up in a wrestling

match. My son liked our stories for a long period of time,

movies with me." Having conquered stage and screen, perhaps

it's the children's literary world next? "I hadn't thought it,

in a bland Beverly Hills hotel. The sopori�c atmosphere livens up

considerably when the charismatic Australian makes his entrance.

He is promoting his latest role as a ruthless pirate called

director Joe Wright. For this part, gone are the matinee idols looks

- Jackman is unrecognisable as the bald, menacing and deliciously

despicable villain. This morning though, wearing a crisp, grey

Burberry suit, he's dapper as ever. "I always wear suits. Even at

weekends. I get a lot of style advice from my wife," he smiles.

I have interviewed the actor several times over the years, once on

Cockatoo Island in Sydney Harbour at 3am, during the �lming of

Wolverine. Even at that unearthly hour he was courteous, interesting

and energetic. In my experience, Jackman ranks as one of the

though he credits a

good upbringing. Is he

nice all the time," he

will make fun of me,

she calls me Senator Jackman. She's like, 'Do you really have to know

the name of every waiter?' But I always saw my parents being

respectful to everyone they met. And I was a waiter for years, so

I know what it is like when people are dismissing you."

But today, Jackman is a Hollywood dream. Proli�c and diverse, he

is an integral part of the globally successful X-Men franchise, sang and

"I never even went into

this day I jump up and

down on the bed!"