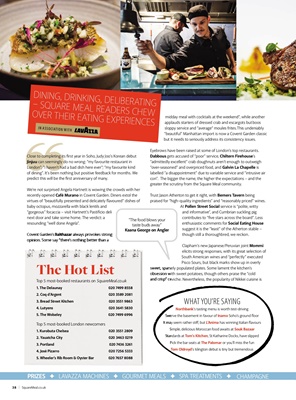 midday meal with cocktails at the weekend", while another

applauds starters of dressed crab and escargots but boos

but it needs to seriously address its consistency issues.

Eyebrows have been raised at some of London's top restaurants.

"over-seasoned" and overpriced food, and Galvin La Chapelle is

labelled "a disappointment" due to variable service and "intrusive air

con". The bigger the name, the higher the expectations - and the

greater the scrutiny from the Square Meal community.

Trust Jason Atherton to get it right, with Berners Tavern being

and informative", and Cumbrian suckling pig

contributes to "  ve stars across the board". Less

suggest it is the "least" of the Atherton stable -

though still a thoroughbred, we reckon.

elicits strong responses, with its great selection of

Pisco Sours, but black marks show up in overly

obsession with sweet potatoes, though others praise the "cold

and crisp" ceviche. Nevertheless, the popularity of Nikkei cuisine is

Jinjuu can seemingly do no wrong: "my favourite restaurant in

London"; "I haven't had a bad dish here ever"; "my favourite kind

of dining". It's been nothing but positive feedback for months. We

predict this will be the   rst anniversary of many.

We're not surprised Angela Hartnett is wowing the crowds with her

virtues of "beautifully presented and delicately  avoured" dishes of

next door and take some home. The verdict: a

opinion. Some say "there's nothing better than a

"The food blows your

Northbank's tasting menu is worth test-driving

Swerve the basement in favour of Inamo Soho's ground  oor

It may seem rather sti , but L'Anima has winning Italian  avours

obsession with sweet potatoes, though others praise the "cold

and crisp" ceviche. Nevertheless, the popularity of Nikkei cuisine is

opinion. Some say "there's nothing better than a

Swerve the basement in favour of

It may seem rather sti , but

Pick the bar seats at

OVER THEIR EATING EXPERIENCES