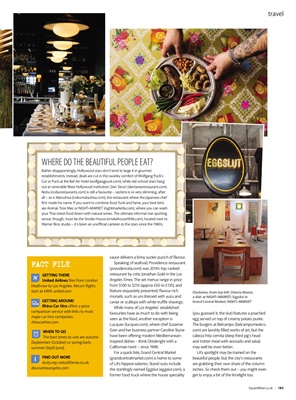 restaurant by critic Jonathan Gold in the Los

morsels, such as uni dressed with yuzu and

While many of Los Angeles' established

favourites have as much to do with being

seen as the food, another exception is

have been o ering modern Mediterraneaninspired

dishes - think Ottolenghi with a

(grandcentralmarket.com) is home to some

of LA's hippest eateries. Stand-outs include

the startlingly named Eggslut (eggslut.com), a

(you guessed it, the slut) features a poached

The burgers at Belcampo (belcampomeatco.

com) are lavishly  lled works of art, but the

and trotter meat with avocado and salsa)

may well be even better.

LA's spotlight may be trained on the

beautiful people, but the city's restaurants

get to enjoy a bit of the limelight too.

comparison service with links to most

The best times to visit are autumn

WHERE DO THE BEAUTIFUL PEOPLE EAT?

Rather disappointingly, Hollywood stars don't tend to large it in gourmet

establishments. Instead, deals are cut in the swanky comfort of Wolfgang Puck's

Cut or Puck at the Bel-Air Hotel (wolfgangpuck.com), while old-school stars hang

Nobu (noburestaurants.com) is still a favourite - sashimi is so very slimming, after

all - as is Matsuhisa (nobumatsuhisa.com), the restaurant where the Japanese chef

 rst made his name. If you want to combine food, funk and fame, your best bets

are Animal, Trois Mec or NIGHT+MARKET (nightmarketla.com), where you can wash

your Thai street food down with natural wines. The ultimate informal star-spotting

venue, though, must be the Smoke House (smokehouse1946.com), located next to

Warner Bros studio - it's been an uno§ cial canteen to the stars since the 1960s.

a dish at NIGHT+MARKET; Eggslut in