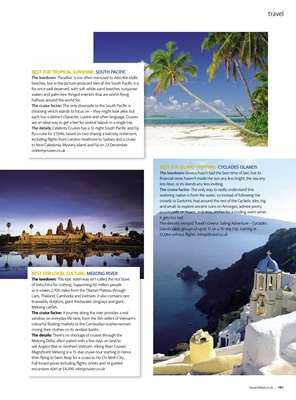 The lowdown: 'Paradise' is too often overused to describe idyllic

beaches, but in the picture-postcard isles of the South Paci c it is

for once well deserved, with soft white-sand beaches, turquoise

waters and palm tree-fringed interiors that are worth   ying

halfway around the world for.

The cruise factor: The only downside to the South Paci c is

choosing which islands to focus on - they might look alike, but

each has a distinct character, cuisine and often language. Cruises

are an ideal way to get a feel for several islands in a single trip.

The details: Celebrity Cruises has a 12-night South Paci c and Fiji

including   ights from London Heathrow to Sydney and a cruise

to New Caledonia, Mystery Island and Fiji on 23 December.

The lowdown: Greece hasn't had the best time of late, but its

 nancial woes haven't made the sun any less bright, the sea any

less blue, or its islands any less inviting.

The cruise factor: The only way to really understand this

seafaring nation is from the water, so instead of following the

crowds to Santorini, hop around the rest of the Cycladic isles, big

and small, to explore ancient ruins on Amorgos, admire pretty

countryside on Naxos, and drop anchor for a cooling swim when

it gets too hot.

Islands takes groups of up to 11 on a 10-day trip, starting at

The lowdown: This epic waterway isn't called the rice bowl

of Indochina for nothing. Supporting 60 million people

as it snakes 2,700 miles from the Tibetan Plateau through

The cruise factor: A journey along the river provides a real

window on everyday life here, from the  sh sellers of Vietnam's

rinsing their clothes on its verdant banks.

The details: There's no shortage of cruises through the

Mekong Delta, often paired with a few days on land to

then   ying to Siem Reap for a cruise to Ho Chi Minh City.