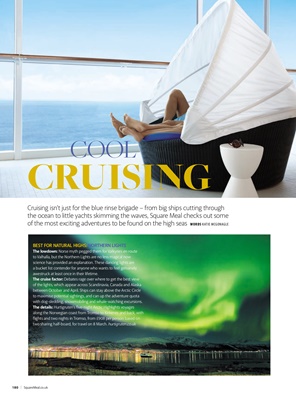 the ocean to little yachts skimming the waves, Square Meal checks out some

The lowdown: Norse myth pegged them for Valkyries en route

to Valhalla, but the Northern Lights are no less magical now

science has provided an explanation. These dancing lights are

a bucket list contender for anyone who wants to feel genuinely

awestruck at least once in their lifetime.

The cruise factor: Debates rage over where to get the best view

of the lights, which appear across Scandinavia, Canada and Alaska

between October and April. Ships can stay above the Arctic Circle

to maximise potential sightings, and can up the adventure quota

with dog-sledding, snowmobiling and whale-watching excursions.

along the Norwegian coast from Tromso to Kirkenes and back, with

 ights and two nights in Tromso, from £908 per person based on