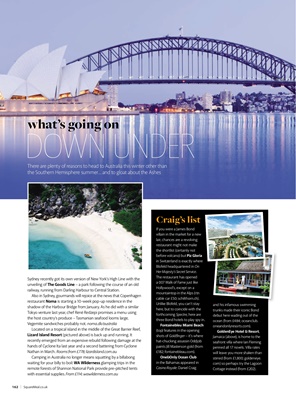 If you were a James Bond

villain in the market for a new

lair, chances are a revolving

the shortlist (certainly not

before volcano) but Piz Gloria

in Switzerland is exactly where

Blofeld headquartered in On

The restaurant has opened

Hollywood's, except on a

mountaintop in the Alps (rtn

Unlike Blofeld, you can't stay

here, but to coincide with the

(top) features in the opening

shots of Gold nger - it's where

in the Bahamas appeared in

and his infamous swimming

trunks made their iconic Bond

debut here wading out of the

Jamaica (above), is home to the

will leave you more shaken than

com) so perhaps try the Lagoon

Also in Sydney, gourmands will rejoice at the news that Copenhagen

shadow of the Harbour Bridge from January. As he did with a similar

Located on a tropical island in the middle of the Great Barrier Reef,

Lizard Island Resort (pictured above) is back up and running. It

recently emerged from an expensive rebuild following damage at the

Nathan in March. Rooms from £778; lizardisland.com.au

Camping in Australia no longer means squatting by a billabong

waiting for your billy to boil: WA Wilderness glamping trips in the

with essential supplies. From £114; wawilderness.com.au

the Southern Hemisphere summer… and to gloat about the AshesDOWN UNDER