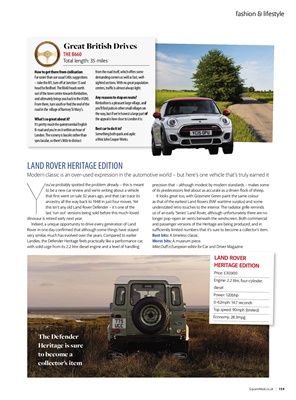 How to get there from civilisation

head for Bedford. The B660 heads north

out of the town centre towards Kimbolton,

and ultimately brings you back to the A1(M).

From there, turn south or � nd the end of the

road in the village of Ramsey St Mary's.

What's so great about it?

It's pretty much the quintessential English

B-road and you're on it within an hour of

London. The scenery is bucolic rather than

spectacular, so there's little to distract

from the road itself, which o� ers some

sections. With no great population

Any reasons to stop en route?

Kimbolton is a pleasant large village, and

you'll � nd pubs in other small villages on

the way, but if we're honest a large part of

the appeal is how close to London it is.

Best car to do it in?

Something both quick and agile:

ou've probably spotted the problem already - this is meant

that   rst went on sale 32 years ago, and that can trace its

ancestry all the way back to 1948 in just four moves. Yet

this isn't any old Land Rover Defender - it's one of the

last 'run out' versions being sold before this much-loved

dinosaur is retired early next year.

Indeed, a unique opportunity to drive every generation of Land

very similar, much has evolved over the years. Compared to earlier

Landies, the Defender Heritage feels practically like a performance car,

with solid urge from its 2.2 litre diesel engine and a level of handling

precision that - although modest by modern standards - makes some

of its predecessors feel about as accurate as a driven £ ock of sheep.

It looks great too, with Grasmere Green paint the same colour

understated retro touches to the interior. The radiator grille reminds

us of an early 'Series' Land Rover, although unfortunately there are no

longer pop-open air vents beneath the windscreen. Both commercial

and passenger versions of the Heritage are being produced, and in

su§ ciently limited numbers that it's sure to become a collector's item.

Mike Du� is European editor for Car and Driver Magazine

Kimbolton is a pleasant large village, and

you'll � nd pubs in other small villages on

the way, but if we're honest a large part of