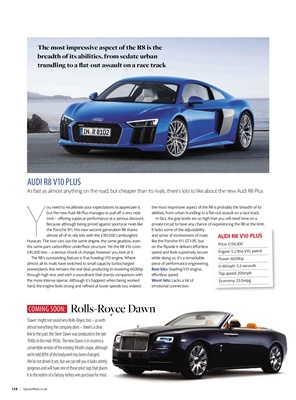 'Dawn' might not sound very Rolls-Royce, but - as with

almost everything the company does - there's a clear

link to the past: the Silver Dawn was produced in the late

convertible version of the existing Wraith coupe, although

we're told 80% of the bodywork has been changed.

We've not driven it yet, but we can tell you it looks utterly

gorgeous and will have one of those price tags that places

it in the realms of a fantasy lottery win purchase for most.

ou need to recalibrate your expectations to appreciate it,

almost all of its oily bits with the £181,000 Lamborghini

Huracan. The two cars use the same engine, the same gearbox, even

the same part-carbon  bre under£ oor structure. Yet the R8 V10 costs

The R8's outstanding feature is that howling V10 engine. Where

almost all its rivals have switched to small capacity turbocharged

powerplants this remains the real deal, producing its towering 602bhp

through high revs and with a soundtrack that stands comparison with

the more intense operas. Although it's happiest when being worked

hard, the engine feels strong and re  ned at lower speeds too; indeed

abilities, from urban trundling to a £ at-out assault on a race track.

In fact, the grip levels are so high that you will need time on a

private circuit to have any chance of experiencing the R8 at the limit.

It lacks some of the adjustability

and sense of involvement of rivals

while doing so. It's a remarkable

Worst bits: Lacks a bit of

The most impressive aspect of the R8 is the

breadth of its abilities, from sedate urban

trundling to a fl at-out assault on a race track

As fast as almost anything on the road, but cheaper than its rivals, there's lots to like about the new Audi R8 Plus