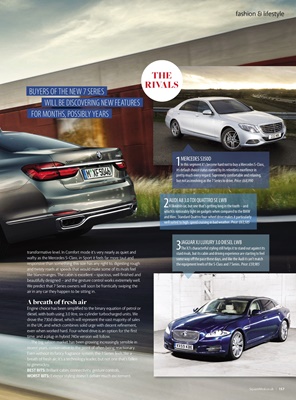 transformative level. In Comfort mode it's very nearly as quiet and

wafty as the Mercedes S-Class, in Sport it feels far more taut and

responsive than something this size has any right to, digesting rough

like blancmanges. The cabin is excellent - spacious, well   nished and

air in any car they happen to be sitting in.

A breath of fresh air

diesel, with both using 3.0 litre, six-cylinder turbocharged units. We

drove the 730d diesel, which will represent the vast majority of sales

in the UK, and which combines solid urge with decent re  nement,

even when worked hard. Four-wheel drive is an option for the   rst

time, and a plug-in hybrid 740e version will follow.

The big saloon market has been growing increasingly sensible in

recent years, conservative to the point of often being reactionary.

Even without its fancy fragrance system, the 7 Series feels like a

breath of fresh air; it's a technology leader, but not one that's fallen

BUYERS OF THE NEW 7 SERIES

WILL BE DISCOVERING NEW FEATURES

A likeable car, but one that's getting long in the tooth - and

which is noticeably light on gadgets when compared to the BMW

staid rivals, but its cabin and driving experience are starting to feel

some way o� the pace these days, and like the Audi it can't match

In this segment it's become hard not to buy a Mercedes S-Class,

its default choice status earned by its relentless excellence in

pretty much every regard. Supremely comfortable and relaxing,