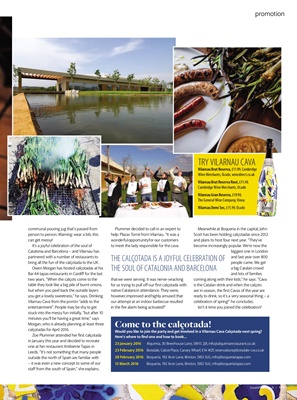 person to person. Warning: wear a bib, this

It's a joyful celebration of the soul of

Catalonia and Barcelona - and Vilarnau has

partnered with a number of restaurants to

bring all the fun of the calçotada to the UK.

Owen Morgan has hosted calçotadas at his

Bar 44 tapas restaurants in Cardi for the last

two years. "When the calçots come to the

table they look like a big pile of burnt onions,

but when you peel back the outside layers

you get a lovely sweetness," he says. Drinking

Vilarnau Cava from the porrón "adds to the

entertainment". People may be shy to get

stuck into the messy fun initially, "but after 10

minutes you'll be having a great time," says

Morgan, who is already planning at least three

in January this year and decided to recreate

one at her restaurant Ambiente Tapas in

Leeds. "It's not something that many people

outside the north of Spain are familiar with

- it was even a new concept to some of our

sta from the south of Spain," she explains.

Plummer decided to call in an expert to

help: Plazas Torné from Vilarnau. "It was a

wonderful opportunity for our customers

to meet the lady responsible for the cava

that we were serving. It was nerve-wracking

for us trying to pull o our  rst calçotada with

native Catalans in attendance. They were,

however, impressed and highly amused that

our attempt at an indoor barbecue resulted

in the  re alarm being activated!"

Meanwhile at Boqueria in the capital, John

Scott has been holding calçotadas since 2012

and plans to host four next year. "They've

biggest one in London

people came. We get

and lots of families

coming along with their kids," he says. "Cava

is the Catalan drink and when the calçots

are in season, the  rst Cavas of the year are

ready to drink, so it's a very seasonal thing - a

celebration of spring!" he concludes.

Isn't it time you joined the celebration?

Would you like to join the party and getinfo@alquimiarestaurant.co.ukCalçotada next spring?

THE CALÇOTADA IS A JOYFUL CELEBRATION OF

THE SOUL OF CATALONIA AND BARCELONA