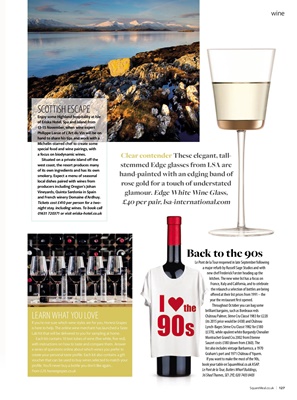 Edge glasses from LSA are

hand-painted with an edging band of

rose gold for a touch of understated

LEARN WHAT YOU LOVE

If you're not sure which wine styles are for you, Honest Grapes

is here to help. The online wine merchant has launched a Taste

Lab Kit that will be delivered to you for sampling at home.

with instructions on how to taste and compare them. Answer

a series of questions online about which wines you prefer to

of Eriska Hotel, Spa and Island from

Philippe Larue of L'Art du Vin will be on

hand to share his tips and work with a

Michelin-starred chef to create some

special food and wine pairings, with

a focus on biodynamic wines.

Situated on a private island o the

west coast, the resort produces many

of its own ingredients and has its own

smokery. Expect a menu of seasonal

local dishes paired with wines from

Tickets cost £410 per person for a twonight

stay, including wines. To book call

a major refurb by Russell Sage Studios and with

kitchen. The new wine list has a focus on

France, Italy and California, and to celebrate

the relaunch a selection of bottles are being

Throughout October you can bag some

brilliant bargains, such as Bordeaux reds

If you want to make the most of the 90s,

book your table on squaremeal.co.uk ASAP.