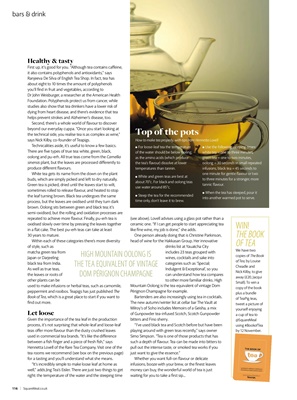 First up, it's good for you. "Although tea contains ca­ eine,

about eight to 10 times the amount of polyphenols

you'll  nd in fruit and vegetables, according to

Dr John Weisburger, a researcher at the American Health

Foundation. Polyphenols protect us from cancer, while

studies also show that tea drinkers have a lower risk of

dying from heart disease, and there's evidence that tea

Second, there's a whole world of  avour to discover

beyond our everyday cuppa. "Once you start looking at

the technical side, you realise tea is as complex as wine,"

Technicalities aside, it's useful to know a few basics.

oolong and pu-erh. All true teas come from the Camellia

sinensis plant, but the leaves are processed di­ erently to

White tea gets its name from the down on the plant

buds, which are simply picked and left to dry naturally.

Green tea is picked, dried until the leaves start to wilt,

sometimes rolled to release  avour, and heated to stop

process, but the leaves are oxidised until they turn dark

brown. Oolong sits between green and black tea; it's

semi-oxidised, but the rolling and oxidation processes are

oxidised slowly over time by pressing the leaves together

in a  at cake. The best pu-erh teas can take at least

Within each of these categories there's more diversity

of style, such as

As well as true teas,

the leaves or roots of

other plants can be

used to make infusions or herbal teas, such as camomile,

peppermint and rooibos. Teapigs has just published The

Book of Tea, which is a great place to start if you want to

Given the importance of the tea leaf in the production

process, it's not surprising that whole-leaf and loose-leaf

used in commercial tea brands. "It's like the di­ erence

between a  sh  nger and a piece of fresh  sh," says

Henrietta Lovell of the Rare Tea Company. Visit one of the

tea rooms we recommend (see box on the previous page)

for a tasting and you'll understand what she means.

"It's incredibly simple to make loose leaf at home as

well," adds Jing Tea's Eisler. There are just two things to get

right: the temperature of the water and the steeping time

(see above). Lovell advises using a glass pot rather than a

ceramic one. "If I can get people to start appreciating tea

One person already doing that is Christine Parkinson,

head of wine for the Hakkasan Group. Her innovative

wines, cocktails and sake into

categories such as 'Special;

Indulgent  Exceptional', so you

can understand how tea compares

to other more familiar drinks. High

Mountain Oolong is the tea equivalent of vintage Dom

The new autumn/winter list at cellar bar The Vault at

Milroy's of Soho includes Memoirs of a Geisha, a mix

"I've used black tea and Scotch before but have been

Simo Simpson. "Tea is one of those products that has

such a depth of  avour. Tea can be made into bitters to

pull out the intense taste, or smoked tea works if you

just want to give the essence."

Whether you want full-on  avour or delicate

infusions, booze with your brew, or the  nest leaves

money can buy, the wonderful world of tea is just

waiting for you to take a  rst sip...

Top of the pots

How to make tea properly, with tips from Henrietta Lovell

For loose-leaf tea the temperature

of the water should be below boiling,

as the amino acids (which produce

White and green teas are best at

about 70°c. For black and oolong teas

Steep the tea for the recommended

time only, don't leave it to brew.

Use the following steeping times:

white tea = one to three minutes,

green tea = one to two minutes,

one minute for gentle  avour or two

to three minutes for a stronger, more

When the tea has steeped, pour it

into another warmed pot to serve.

THE TEA EQUIVALENT OF VINTAGE

copies of The Book

of Tea, by Louise

Nick Kilby, to give

copy of the book

a cup of tea to