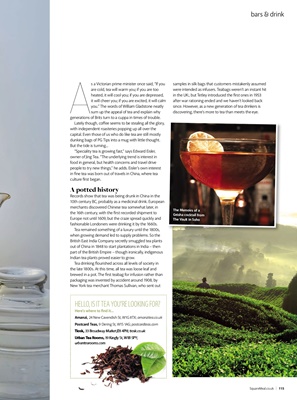 s a Victorian prime minister once said, "If you

are cold, tea will warm you; if you are too

heated, it will cool you; if you are depressed,

it will cheer you; if you are excited, it will calm

you." The words of William Gladstone neatly

sum up the appeal of tea and explain why

generations of Brits turn to a cuppa in times of trouble.

Lately though, co­ ee seems to be stealing all the glory,

with independent roasteries popping up all over the

capital. Even those of us who do like tea are still mostly

dunking bags of PG Tips into a mug with little thought.

But the tide is turning...

owner of Jing Tea. "The underlying trend is interest in

food in general, but health concerns and travel drive

people to try new things," he adds. Eisler's own interest

in  ne tea was born out of travels in China, where tea

Records show that tea was being drunk in China in the

10th century BC, probably as a medicinal drink. European

the 16th century, with the  rst recorded shipment to

Europe not until 1609, but the craze spread quickly and

fashionable Londoners were drinking it by the 1660s.

Tea remained something of a luxury until the 1800s,

when growing demand led to supply problems. So the

out of China in 1848 to start plantations in India - then

part of the British Empire - though ironically, indigenous

Tea drinking  ourished across all levels of society in

brewed in a pot. The  rst teabag for infusion rather than

packaging was invented by accident around 1908, by

were intended as infusers. Teabags weren't an instant hit

after war rationing ended and we haven't looked back

since. However, as a new generation of tea drinkers is

discovering, there's more to tea than meets the eye.

HELLO, IS IT TEA YOU'RE LOOKING FOR?

The Memoirs of a

The Vault in Soho